NHS digital data tells us that nearly two-thirds of adults are classed as over-weight, with more than a quarter obese; shockingly one in ten children in reception year are also classed as obese, that figure rises to one in five by year six. Source: Food Navigator. Having seen the introduction of mandatory calorie labelling on menus, as part of the Government’s obesity strategy, & following consultation with industry, legislation to restrict unhealthy food promotions in stores was due to come into force October 2022; the rationale being that volume promotion & hi-profile instore placement leads to increased consumption contributing to long term health issues. Legislation will apply to selected categories: chocolate, confectionary, breakfast cereals, yoghurts, ice cream, morning goods, dairy desserts, snacking & sweet biscuits.

However, we now understand that parts of this legislation, originally planned for April, delayed in implementation until October allowing further time for businesses to prepare, has been delayed again for a further year. Concerns over the struggle faced by both manufacturers & consumers due to rapid inflation, Chief Scientific officer Kate Halliwell reasoned that “it makes sense to delay the restrictions on volume promotions for everyday food & drink products, including breakfast cereals, ready meals & yoghurts”. 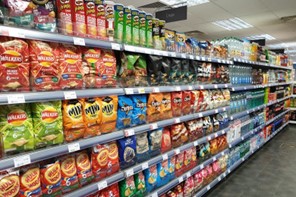 Due to the delayed implementation products synonymous to the daily diet routine for many of us, whilst still facing placement restrictions from October, the much-loved multibuys, 3 for 2 offers & ‘bogofs’ will be around a little longer; non-volume promotions such as ½ price, 25% will also still be permitted. However, the elements of the legislation aiming to inhibit placement will still go ahead this October 2022, with HFSS products no longer allowed promotion in high-profile positions – entrances, aisle ends, checkouts.

According to reports in the Grocer, recent statistics from Lumina Intelligence state that nearly half of all HFSS products purchased are from these high-profile  locations with a further 32% being purchased as part of a promotional offers. However, 57% of shoppers have stated they will continue to purchase, promotion or not.

HFSS refers to food & drink products that are high in (saturated) fat, salt or sugar according to the Department of Health’s Nutrient Profiling Model (NPM). Foods that score four or more & drinks one or more, are classed as HFSS.

Public Health Minister Jo Churchill: ‘The COVID-19 pandemic has brought into sharp focus the impact that an unhealthy weight can have on people’s health. We know families want the healthy choice to be the easy choice…restricting promotions on unhealthy foods will help them achieve this.”  Lumina Intelligence however state that only 12% of shoppers indicated that they would no longer be purchasing HFSS products. Insight Director, Blonnie Whist, stated “HFSS regulations continue to divide both consumer & businesses… whilst most think action is necessary; many believe that the legislation will be ineffective, with just 4 in 10 consumers believing the legislation will be effective in tackling unhealthy eating.

Not all companies see HFSS as a restriction however, Ben Greensmith of  Tony Chocolonely’s notes on a recent Table Talk episode. “If this just means that consumers are having to make a slightly more conscious choice, then it will ultimately have an impact on the category, but that isn’t necessarily a bad thing. For those brands and products that are at the more premium end, we may see shoppers making more informed choices that means they may be buying a bit less but spending a bit more.” Non HFSS products will have the opportunity to increase in-store visibility moving to more premium store positions as HFSS product vacates; category leaders in health & those able to re-formulate may well reap rewards.

The restrictions will apply to medium & large retailers, including those with 50 or more employees, as part of the regulations, the government will provide local authorities with the option of issuing civil penalties for non-compliance of restrictions. HFSS Regulations from ACS

Recent reports suggest that 44% of retailers & 54% of independent retailers are unaware of the legislation & what they will need to do to become compliant. Nearly half of food service operators they were also unaware & despite minimal impact on hospitality many are worried that similar legislation targeting them will be next. Convenience Store

Compliancy instore will result in major changes to shop floor layout, subtle changes are already happening in many larger stores. With the loss of gondola ends alternative products may well include HFSS compliant products signposting you to the so-called power aisles where you can shop the larger portfolio. Wellness bay are looking set to become a ploy to entice spend via the halo effect: ‘wellness bays are the solution most likely to get the seal of approval from health campaigners. The idea is to replace promo bays of HFSS foods with promos on healthy foods that have low-calorie or protein-rich credentials…But there is another consideration: these bays create a significant ‘halo effect’ for products next to them. In some cases, sales have been found to double. Shop Floor Insights, via The Grocer

Kellogg’s have pledged to cut sugar content by 10% across kids’ cereal ranges & salt in all cereals by at least 20% by the end of the year;

Weetabix are promising a ‘high fibre, low in fat’ start to your day as they team up with Lyle’s, launching Lyle’s Golden Syrup Weetabix.

Look out for newer brands including Shore with their siracha seaweed chips, achieving top marks for vegetable content without the changing the inherent flavour profile.

‘Breakfast without the bowl’ from KIND comes in the form of their new Breakfast Almond Butter, switching nuts to oats, millet, buckwheat, amaranth & quinoa, using almond butter for a higher fibre content.

Urban Legend doughnuts, all in at under 150 kcals;

Better For You crisps from Simply Roasted providing 50% less fat, significantly less salt & just 99Kcal per pack, they are using a patented roasting process which cost 20 million over 10 years to develop.

But… keep an eye out, there is still of time for all this to change…

Kellogg’s are challenging the legislation, taking the UK Government to court for being ‘unreasonable’ over the restrictions; failing to take into account that 92% of people add milk or yoghurt to their cereals thereby altering the nutrient profile, they state this means the full nutritional value is not measured leaving the statistics skewed. Critics however are calling this a ‘blatant attempt by a multinational food company to wriggle out of vital new regulation’ finding it ‘shocking that a company such as Kellogg’s would sue the government over plans to help people be healthier’ Obesity Alliance. Whoever wins, the case will be closely monitored by the entire food industry with millions of pounds waiting to be gained… or lost.

We are happy to keep you updated on implementation; if you would like further support with developing non-HFSS products, reformulating your current portfolio or simply looking for instore placement inspiration please get in touch with our experienced commercial & development team. Looking to do a little market research? Our sister Company Good Sense will be delighted to help to ensure that you get the perfect product to your consumer.

Anybody fancy a picnic?

The Little Book of Innovation – Chapter 3

Sorry, the comment form is closed at this time.

"Join Our Newsletter and Get a Free Consumer Quick Poll"